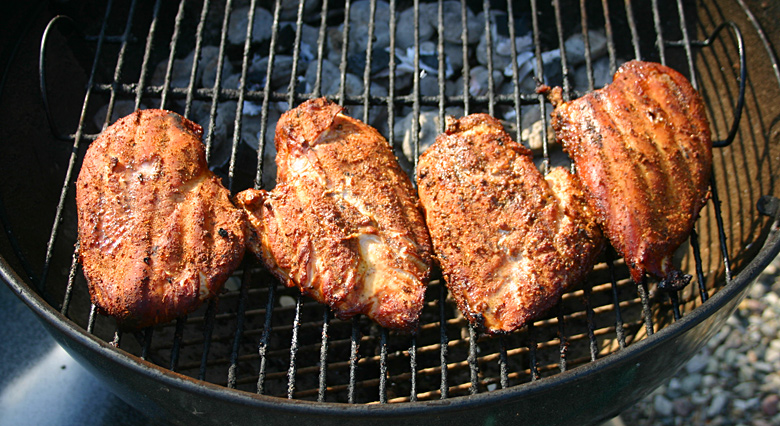 Spice rubbed chicken on the grill

Finally we got some summerlike weather here in Michigan! It was in the 80s this past Sunday, and so the barbequing season begins. Now, I’ll barbeque and grill outside all year long, but it’s definitely more fun to be standing around the grill in shorts and a t-shirt, cold beverage in hand, than freezing in the cold with snow blowing around.

We love to barbeque and grill, and I’ve done a lot of it. In the coming summer months I’ll be doing my best to impart the tricks and techniques I’ve learned about the fine art of grilling and barbeque over the years. Why do I keep saying grill AND barbeque? Grilling is cooking food directly over high heat, while barbequing is cooking food slowly with indirect heat. Then there’s smoking, which is similar to bbq, which can also involve smoke, and is also done on low heat, sometimes lower than bbq. Each method has its place-you’d grill a steak, you’d barbeque or smoke a larger cut of meat like a brisket or a roast.

In the future I will do posts on taking all day to slow-smoke a couple whole chickens, a pork shoulder or even a whole turkey. But I didn’t have a lot of time this particular Sunday, since we were doing chores outside all day, and boneless chicken breasts were what we had on hand. This blog is about using what you have in the time that you have, so I decided to do a spice rub using the boneless chicken, and do sort of a cross between grilling and bbq/smoking. This post can serve as a “BBQ 101″ course for inexperienced bbq’ers. The advanced courses will come later… 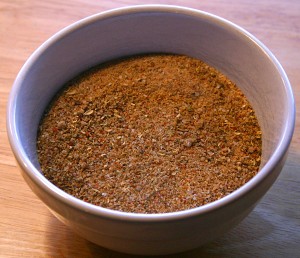 I usually just wing it when I mix up a spice rub, but this time I decided to try the “classic” spice rub ratio of 8:3:1:1. That is, 8 parts brown sugar, 3 parts kosher salt, 1 part chile powder and 1 part every other herb and spice you want to add. Which in the ingredients list above translates to: 8 tablespoons brown sugar; 3 tablespoons salt; 1/2 tablespoon of some very spicy Indian chile powder I have plus 1/2 tablespoon less spicy Chipotle chile powder to make the first “1″ in the ratio; then for the second “1″ in that ratio there are fractions of teaspoons of the herbs and spices to make one tablespoon (1 tablespoon = 3 teaspoons). If that’s too much math, just remember:

I was skeptical of the amount of sugar in the ratio, seemed like way too much sugar. It turned out good, but in the future I might cut down the salt a little. It’s easy to add too much salt to a dry spice rub, so try to use seasonings that don’t have salt added. Use garlic powder, not garlic salt…celery seed, not celery salt. That way you can control the salt you do add. Or cut back on the kosher salt a little if you do use seasonings with salt added. The Old Bay seasoning I used has salt in it, so that may be where I overdid it.

The herbs and spices are what I chose this particular time, but feel free to try your own mix of whatever you like, or whatever you have on hand. Use whole spices instead of powdered whenever you can and grind them when you need them- the spices stay fresh a lot longer in their whole form. I put whole cumin, coriander, celery seed, and whole black peppercorns in an old electric “spinning blade” type coffee grinder with the thyme and oregano, and ground it all up. 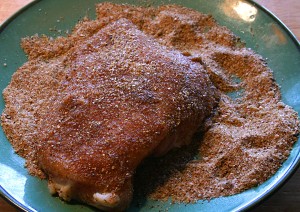 Put the rub on a plate and roll the chicken around until it’s nice and coated with the spices. Then put the rubbed chicken in the refrigerator and let the rub spices mingle for an hour or two, if possible.

Now we get the grill ready- clean up the grate and dump out any old charcoal ash from last time. I used my Weber kettle grill for this job. What’s that… can you use a gas grill, you ask? No, you can’t.

Okay, you can, but I’m not a big fan of gas grills, and I don’t think the results will be as good. When it comes to the smoking part, I’ve heard you can put wood chips in foil rolled up with the ends open to let smoke out, and put the foil-covered chips directly on the heating element. But I don’t know how well that works, never tried it. On some types of gas grills you might not be able to do it at all. 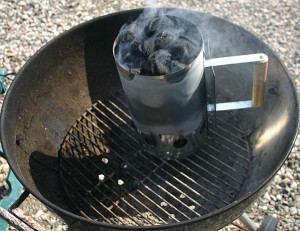 Firin' up the coals

Fire up the coals- I use that charcoal chimney thing you see in the pic- it works great and you don’t have to worry about getting any lighter fluid taste in your food this way. A note about charcoal: some bbq purists only use real solid-wood charcoal, instead of the pressed-and-formed “briquette” style charcoal I’m using here. I’ve used the real charcoal before, but it’s expensive and doesn’t stay hot too long in my opinion. A good quality briquette style charcoal seems to give a good long consistent heat, and I compensate for the lack of flavor you get from real charcoal by liberal use of wood chunks or wood chips mixed in with the coals. 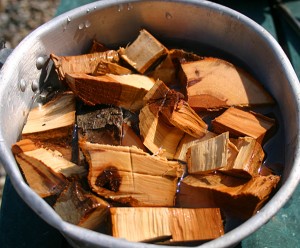 Add water to wood chips. You can buy wood chips or chunks pretty much wherever barbeque supplies are sold, or you can use most types of seasoned hardwood if you happen to have it, like maple, oak, hickory, and fruit-bearing woods like cherry or apple. DO NOT use any pine or evergreen wood for smoking- the pine sap is toxic, or at least very bad tasting. I used some seasoned wood from an old apple tree that fell down on our property a couple years ago- I miss the tree, but I’m making sure it didn’t fall down in vain. 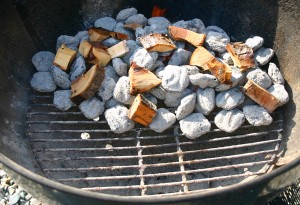 When the coals are ready, spread them out over half the grill, drain the water from the wood chips and spread them on the coals. Put the chicken on the side of the grill without coals, so it is indirect heat, as in BBQ, but the grill will be hot enough so the chicken won’t cook too slowly. Put the grill top on and adjust the air vents to about 2/3 open. Turn the chicken after 5 or 10 minutes, make sure it’s not cooking too fast. We want it a nice golden brown, not blackened. If it does seem to be scorching a little on one side, or if the wood is on fire, close the air vents more until things settle down a little. Put a meat thermometer in the thickest part of the biggest chicken piece. You don’t have to use the thermometer, but it’s really easy to overcook boneless chicken breasts- there’s no such thing as medium-rare chicken and we want to be safe, so people tend to err on the side of caution. The result is dry, rubbery chicken. The thermometer will let you take the chicken off the heat when the internal temperature is 165 degrees- safe enough to kill any bacteria, but leaving the chicken nice and tender and juicy inside.

While the chicken is cooking, get the asparagus ready. Wash and remove the tough inedible ends of the stalks. An easy tip for doing that instead of cutting the ends off is, grab a handful of asparagus and just snap off the ends-they’ll break off at the natural point where you’d want to cut them. Roll them up with some olive oil and add coarse-ground pepper and kosher salt. 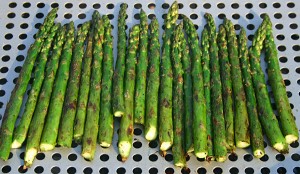 When the chicken’s almost done, put the asparagus on the grill directly over the heat. You can put it right on the grill, you’ll just have to be careful not to let too many fall through the grate (you’ll lose one or two, no matter how careful you are). I used a veggie-holder grill thing you can see in the pic that works nicely. Keep a close eye and roll the stalks around often so it doesn’t burn on one side. it’ll be done when it’s a little blackened and shriveled-up looking. Grilled asparagus ain’t the most attractive looking way to prepare it, but it sure is tasty this way.

Serve with a side like a simple baked potato and enjoy!