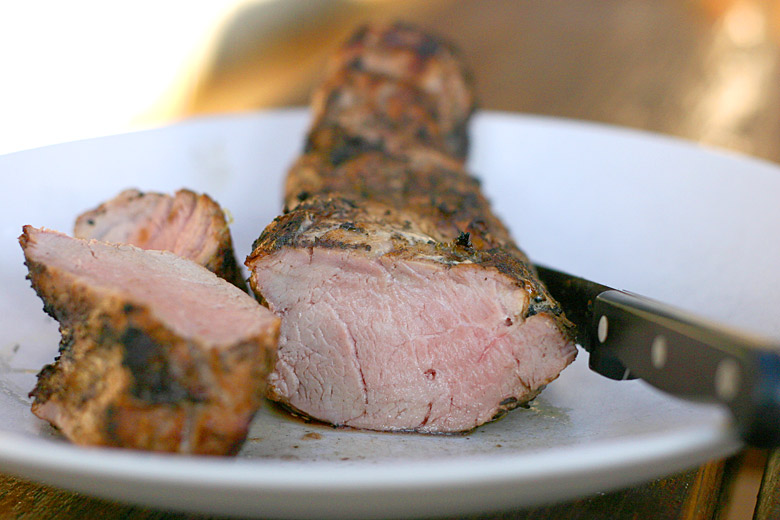 Pork tenderloin is the equivalent of the beef tenderloin that filet mignon cuts come from. Used to be though, the Food and Drug Administration recommended cooking pork to an internal temperature of 165 degrees– which resulted in a relatively dried-out, flavorless cut of meat. But a couple years ago, the FDA changed their recommendation for cooking pork to an internal temp of 145 degrees. This is great news for us backyard barbequers, for now we can confidently cook pork tenderloin the way many chefs have been doing it for years. And what a difference 20 fewer degrees makes! I was amazed at the difference the first time I tried it. Pork tenderloin cooked medium, so it’s still slightly pink in the middle, is juicy and delicious. It almost rivals filet mignon in flavor, in my opinion, and at a lot less per pound.

Grilled pork tenderloin is good either as a dry rub or marinated. I decided to marinate it this time– maybe I’ll do a dry rub pork loin post later this summer– I’ll definitely be making this again.

Serves 2-4, depending on size of tenderloin

Heat up charcoal to cover half the grill, or heat up half the burners on your gas grill, if you insist on using a gas grill (crime against barbeque, in my opinion, but I try to keep an open mind). I also cut up some apple wood, burning some on the coals to embers, and reserve a few chunks to soak in water for smoking. I think I mentioned in another post, if you have a gas grill and you want to smoke meat, I’ve heard you can put wood chips in foil, wrapped up but open on the ends, then set directly on a burner to get the wood inside the foil smoking.

When the coals are ready. first put the pork on the hot side of the grill, turning every few minutes just until you get a nice brown on outside of the meat. Then move the meat to the cooler side of the grill to finish cooking with indirect heat. Insert the thermometer probe into the middle of the loin, sit down, open your favorite beverage, and wait until the temp reaches 145. take the tenderloin off the heat, let rest for 5 minutes or so, and enjoy!