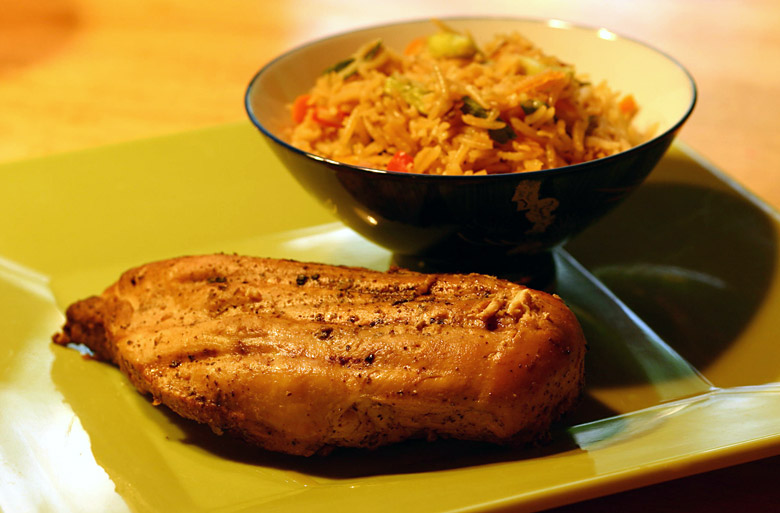 Wanted to grill something this past weekend. But we didn’t have much in the house and this is the season when all the yard work makes every weekend minute precious– no time in the schedule for a last-minute grocery store run. Let’s see what we have…hmmm, some boneless chicken breasts. OK, but how to season them…a spice rub? Nahh, done that many times. Maybe some kind of marinade, but what kind exactly? What to make, what to make… finally decided on a quasi-Asian style marinade. Only had a few hours to marinate it, but it turned out great! For a side dish I made some fried rice with ingredients I had on hand– that’s what’s in the background of the pic above. The rice turned out really good too– I’ll make a separate post on the fried rice next week.

Separate the cloves from the head of garlic and remove the skins. Dice up the garlic, or better yet, crush the cloves in a garlic press. Mix the garlic with the rest of the marinade ingredients. Marinate the chicken for at least several hours, preferably overnight.

As always, heat up enough charcoal to cover half the grill, and either burn some of your favorite hardwood down to coals or soak some wood chips for smoking. What I’ve been doing lately is lighting the charcoal in a chimney starter, then pouring out the coals onto the bottom of the grill when they’re good and ignited (but before they’re covered in gray ash, meaning they’re ready for cooking). I put some pieces of wood on the charcoal so it has a chance to catch fire, burn down to coals and be ready for cooking when the charcoal’s ready. the slightly quicker, easier method is to briefly soak wood chips, and throw the chips on the charcoal when it’s ready for cooking. I used apple wood, and it worked really well with this recipe.