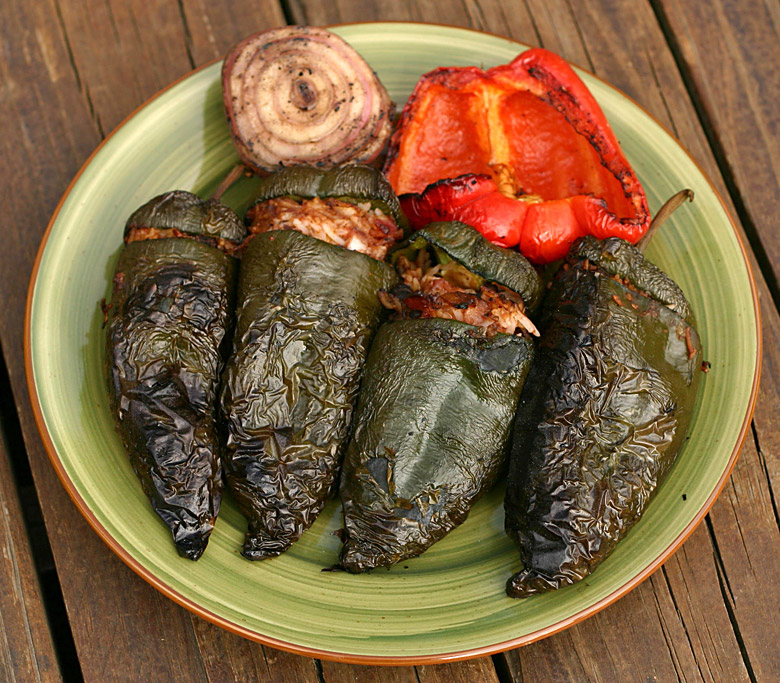 I felt like grilling something sort of Mexican style last weekend. I had a general idea of marinating and grilling flank steak with some peppers and onions and making fajitas. So I stopped at the grocery store to get a few ingredients– the steak, some corn tortillas… and I noticed some nice-looking poblano peppers that intrigued me. Decided to pick up a few poblanos, not sure what I’d do with them. We already had plenty of red and green peppers to grill for the fajitas, so I decided to stuff the poblanos. Never tried stuffing them before, but I’d heard about stuffed poblano peppers and it sounded good in theory. Well, I put together some stuffing ingredients from what I had around, and the stuffed poblanos turned out fantastic on the grill! Delicious and filling. So good in fact, that we started eating them first and almost forgot about the flank steak, although that turned out great too. Maybe I’ll do a post about the flank steak next week. We decided the stuffed poblanos and the steak would be enough for dinner and figured we’d make fajitas another day.

It’s easy to make this a vegetarian meal if you use water instead of chicken stock to cook the rice and leave out the bacon. Leave out the cheese, and it’s vegan.

Heat the 2 cups of low-sodium chicken stock or water to boiling, then add the rice, turn heat down to low, and cover. When the rice is ready in about 20 minutes, mix with the other stuffing ingredients. The same tip I gave for the fried rice recipe applies here– use just a little bit less than 2 cups of liquid to the 1 cup of rice, and it’s also a good idea to undercook the rice just a little. There’s more liquid to be added with the salsa and beans and more cooking to be done on the grill.

Cut the tops off the poblano peppers and carefully cut the two ribs on each side of the seed pod area that holds it to the inside of the pepper, so the seeds can be removed. Fill the empty pepper with the stuffing mix and put the top of the pepper back on, holding it on with two toothpicks.

The same grilling instructions from the Perfectly Grilled Filet Mignon post apply here: Get enough charcoal ready for one side of the grill, and soak a handful of your favorite type of wood chips. When the coals are ready, add the wood chips and roast the peppers on the hot side of the grill to get a nice char (but be careful not to burn them), turning at least once to a side. Then move the peppers to the cooler side of the grill to finish cooking. The peppers will take about 15 minutes total to cook, so if you’re grilling them with a thin steak like a flank steak, you’ll want to start the peppers first. Enjoy!