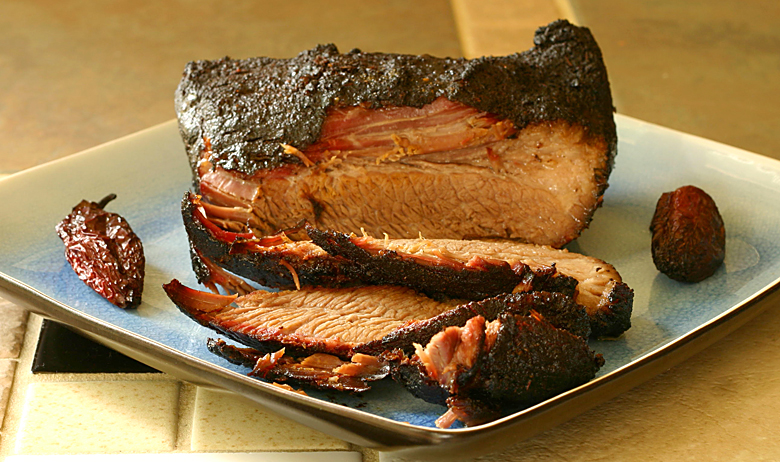 I finally got around to attempting a slow-smoked barbequed beef brisket today! I’ve been meaning to for a while now. Beef brisket is one of the big three stars of barbeque along with barbequed ribs and pulled pork. The ribs and the pork I’ve done and I was very happy with the results. But I’ve heard barbequed brisket can be a little tricky– it’s easy to end up with a brisket that’s a little tough and on the dry side. And my first attempt could have been a little more tender and juicy, but for the most part I thought it was a good first effort, with room for improvement.

So what did I learn, and what would I do to make it even better for next time? Well, I started with about about a 6 or 7 lb. “point cut” which is one of two cuts from the brisket– the “flat cut” is leaner, so it doesn’t get the same flavor from the delicious melting fat as the beef is cooked low and slow. So, I had the right cut– so far so good. But I made the decision to cut the brisket in half and freeze the other half, because it seemed like a lot of meat and I thought it would cook to temperature more quickly. I probably should have cooked the whole point cut at once.

One note on the type of brisket to buy for barbequeing– don’t confuse this with a corned-beef brisket, which has been cured and flavored with a mix of preservatives and spices, and has that bright-pink color you see in corned beef and cabbage, or deli-style corned beef sandwiches. You want an uncured beef brisket, preferably the point cut.

Normally I would slow-cook something like this in my smoker– the cylindrical thing I used on the barbequed turkey post, but I had just bought a Weber kettle-style grill, the “Gold” model, with a thermometer and an upper grate with a couple cool little hinged wing things on both sides that fold up to add more coals and wood on each side when cooking indirectly. So I was excited to try something a little more complicated than hamburgers or steaks on it. The temperature was easy to keep steady on this grill, but the one drawback was I couldn’t seem to get the temp under 250 degrees without shutting the vents almost completely and risk snuffing out the coals. I think a temp of 225 would’ve been a little more ideal. But I may have started with too many coals on each side. Still, I think next time I’ll go back to the smoker.

So cooking the whole point cut and trying to hold the temp to around 225 will mean it’ll take even longer than my half-cut at 250 degrees, and that took between 9 and 10 hours to reach 190 degrees– the temp at which the tough collagen in the meat melts and makes the meat tender.  Typically when slow-cooking large cuts of meat, there’s a period called the “stall”, I think I’ve mentioned before- the “stall” is where the internal temp of the meat, measured with a meat thermometer, seems to hang around 150 for  hours before it starts climbing again. To combat the “stall” and speed things up, you can wrap the brisket in foil when the internal temp hits around 150. Then remove the foil again for the last hour, or when the internal temp of the brisket hits around 180 degrees, to make sure the “bark”– the dark smoky outer crust of the brisket– has a chance to get nice and crispy. That’s one drawback of the foil-wrap method to fight the stall- it can prevent that delicious “bark” from forming, which  is considered by some the best part of the brisket. The bark on my brisket turned out great, since I didn’t need the foil-wrap trick this time. 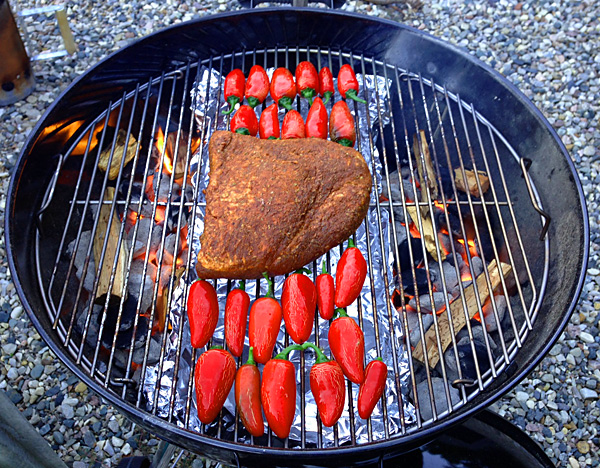 Where it all began at 7 am.

Now about the second part of the post title, the Chipotle barbeque sauce…I’ve had a lot of peppers on the jalapeno plants in my garden this year, so I got the idea to try to make my own chipotles– red ripe jalepeno peppers that are smoked for several hours, then turned into a paste or powder. Thing is, it’s hard to make chipotle without growing your own peppers, because it’s difficult to find ripe jalapenos at the store– you usually find only green jalapenos. I left a lot of peppers to ripen on my plants, picked a bunch of them this morning, and smoked them along with the brisket. So when I made my barbeque sauce for the brisket I basically made my version of the North Carolina-style sauce I used when I made pulled pork, but instead of Tabasco I used 4 or 5 of the smoked red peppers. The sauce was really special with the chipotle peppers added! Kristina really liked it too. It could have merited a post of its own. If you want to try making this sauce but unfortunately don’t have any ripe jalapenos on hand or time to smoke them for ten hours, you can use store-bought chipotle powder and it’ll be almost as good.

Start with the brisket. It will have a layer of fat on one side; it should be about 1/4 inch thick. If it’s much thicker, trim some fat until there’s about 1/4″ left, give or take.

Mix up the rub ingredients and rub it on the brisket the night before. Wrap the rubbed brisket up in plastic wrap, put it in the refrigerator, and set your alarm. You’re going to want to get to get started early, because the barbequing’s going to take as long as 13 hours.

Bright and early the next morning, get the charcoal started and soak some of your favorite hardwood in water for smoking– I used apple and hickory. If you’re cooking on a kettle-style grill like I did, you’ll want to have some type of pan in the middle under the brisket to catch the juices, with coals on both sides to cook indirectly. I made a “pan” for the center of the grill out of a couple layers of heavy-duty foil, added the hot coals to both sides and a few chunks of wood on the coals. Place the brisket fat-side up in the center (that way the fat melts down through the brisket, self-basting it) along with whatever else you may be slow-smoking, like red jalapenos, in the center. Cover and adjust vents until you get a nice steady 225-250 temp. You’ll need to add new coals every 2 hours or so, and more wood as needed.

After a few hours, insert your trusty meat thermometer. When you see the temp reach around 150, that’s when you figure out whether you have time to wait it out to the magic 190 degree mark and ensure a nice chewy bark, or you want to speed things along and wrap it in foil.

Now it’s time to make the sauce. Mix the ingredients and heat in a pan for 15 or 20 minutes to not quite the boiling point– a low simmer is good. If you smoked peppers and want to add them to the sauce like I did, let the sauce cool, then add 4 or 5 peppers (stems removed) to a blender with a little of the sauce and puree. Stop, add a little more of the sauce and puree some more. Repeat until all the sauce is blended in.

If you did the foil-wrap method, remove the foil when the internal temp hits 180 or so there’s around an hour to finish the outside “bark”. At 190 degrees, remove the brisket from the grill and let it rest for 10-15 minutes before serving. Serve with your favorite sides– I steamed up some broccoli and made another batch of that excellent mac and cheese from this post. Enjoy!