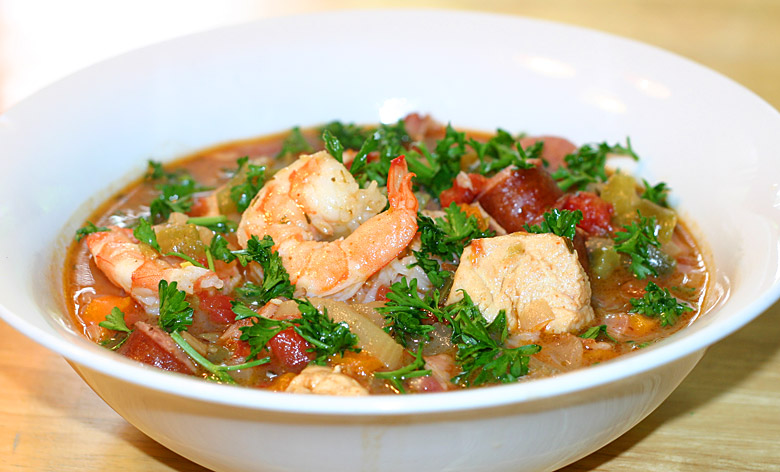 My version of Jambalaya/Gumbo is one of my favorites to make (and to eat!). I made this with a roux (mix of oil and flour) to thicken it up and give it more flavor, and Jambalaya is typically made without a roux, so this is probably more of a Gumbo. But when I think Gumbo I think of adding okra, of which this has none. And this has tomatoes, which I think makes it Creole, the Cajun version having no tomatoes, I believe. So, Jambalaya or Gumbo? Creole or Cajun style? I don’t know, but I know it sure is good.

Since this is Recipe Options, before I give my recipe I should say there’s no need to stick to it! There’s a lot of variation with Creole/Cajun style meals. They usually all have the “holy trinity” of vegetables: bell pepper, onion and celery. And there’s also a “holy trinity” of herbs I think of as being necessary to Creole/Cajun style– thyme, oregano and bay leaves. And there should be some heat added with cayenne pepper, depending on how spicy you like it. After that, it’s wide open– three types of meat are pretty typical- sausage, chicken and some type of seafood. But if you just have shrimp, it’s a Creole shrimp stew! Or try crab meat instead of shrimp. If you don’t have sausage, I’ve used bacon and that works well. I mentioned tomato vs. no tomato. I also mentioned roux vs. no roux– I’ve made this plenty of times without a roux, and it’s still plenty good– and a lot faster to make. I add a little lime juice to my recipe, and that’s not traditional, but I think it really works with the other ingredients. We like it spicy, so I often add Tabasco sauce,  as well as Jalapeno peppers or whatever peppers I might have on hand- Hungarian, Serrano, Thai-style peppers, etc. Never tried throwing a Habanero pepper in there, but I bet that would be really good. Some recipes call for a shot of Worcestershire sauce– sometimes I add some, sometimes not, depending on what mood I’m in. When it gets to the simmering stage, I’m tasting it and deciding if it needs a little more of this or that. Some dishes call for simplicity, but this is one that really brings out the mad scientist in me.

Chop up vegetables and cut up chicken and sausage into not too small pieces. Mince up the garlic into small pieces. Here’s a good article that covers cooking terminology like chopped vs. diced vs. minced. If the shrimp has shells, remove them and you can simmer the shells in the chicken stock for awhile to give the stock more of a seafood flavor. Otherwise, you can add a bottle of clam juice instead. Or do both! 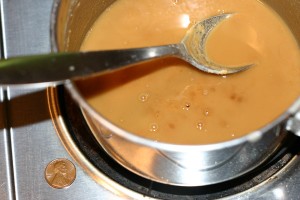 Heat up the peanut oil (or peanut oil and butter, or 100% butter) on medium-low heat in a large pot and add the flour a little at a time, stirring constantly. Keep adding flour until the mix of oil and flour (the roux) has a paste-like consistency. Keep stirring, stirring until the roux is a nice medium reddish-brown color, the color of peanut butter or an old penny. This will take about 1/2 hour to 45 minutes. To stop stirring for too long is to burn the roux. 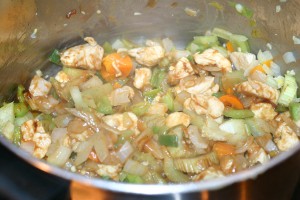 While stirring the roux, I like to cook the chicken and vegetables (and the sausage if it’s uncooked, but not the garlic yet) with a little oil in a separate skillet. Then, when the roux is done, add the chicken, sausage, vegetables and garlic, and stir some more, letting it all cook a little more and blend. 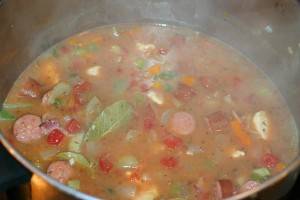 Start adding the chicken stock (don’t forget to remove the shells if you added them), a little at a time, until it’s mixed in and has a good stew-like consistency, not too thick or too thin. The chicken stock should be hot or at least warmed up before it’s added to the roux in order to mix properly. Now add the tomatoes, herbs and spices (all the rest of the ingredients besides the parsley, shrimp and lime juice), and let it all simmer for about 1/2 hour-45 minutes.

When it’s done simmering, mix in the lime juice, serve over rice and garnish with fresh diced parsley if you like. Enjoy!