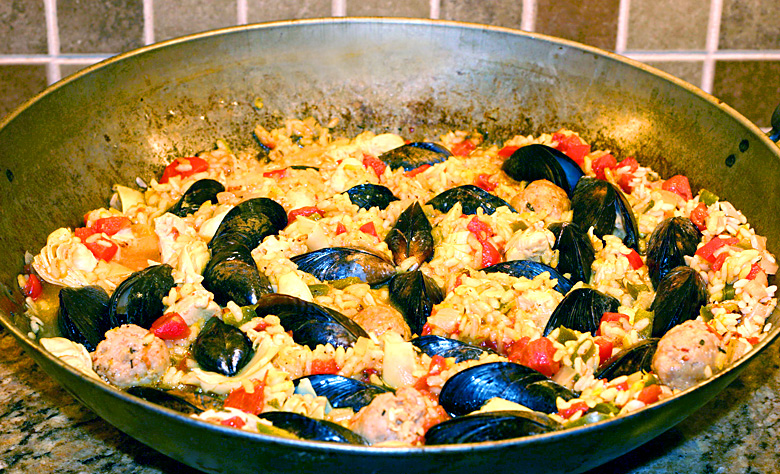 Paella is a dish originated by Spanish peasants, who used whatever they had on hand that day to make it, with local vegetables and whatever meat they could get hold of– often rabbit. That sense of improvisation makes paella perfect for RecipeOptions.com.

Over the years I’ve made many variations on Paella (Haven’t tried a version with rabbit yet, though). Often Paella has a combination of meats, seafood being very prominent. But I’ve made a version that was chicken-only when we had a friend over who was allergic to shellfish. And it would be very easy to make a very good vegetarian Paella, maybe with some eggplant added. So feel free to experiment with your own ingredients!

Pretty much the only constant ingredients when making paella are some type of short-grain rice and saffron. Fun fact about saffron- it’s one of the most expensive, if not the most expensive, spices per pound in the world. But don’t let that discourage you and decide to leave it out– you only use a very small amount. The distinctive bright yellow color and the unique and very distinctive flavor saffron adds to Paella makes it a very key ingredient.

For the rice, I used to use Arborio, the same style used for Risotto, but I recently read that it’s too starchy for Paella– the starchiness of Arborio is what gives Risotto that creamy texture when you stir the Risotto while it’s cooking. So for this recipe I tried a “Calrose” rice. I’ve heard Valencia or Calasparra are better, but they may be hard to find and may require purchasing online.

So for my version these days I’ve settled on a combo of chicken, Mexican Chorizo (I take it out of its casing and roll up little chorizo meatballs), shrimp and mussels. Spanish Chorizo might be a more “authentic” choice but I like the Mexican version. As for vegetables, my version is a little more unothodox– I like adding artichoke hearts, which I don’t think I ever saw in any Paella recipe but I think works in my version. Peas seem to be typical in every other Paella recipe I’ve seen, but peas are one of the few vegetables I’m not really crazy about, so I leave them out. Please feel free to add peas to yours if you like them. I’ve joked my version should really be called “Aella”, because….no P’s! (Sorry, that’s why I don’t write a humor blog).

With its bright colors– the bright yellow from the saffron, the green and red of the peppers and tomatoes, this makes a festive meal for around the holidays. Many families have a “Feast of Seven Fishes” tradition on Christmas Eve– an all-seafood Paella could easily be part of that. Heck, even if you’re looking for something a little different for Christmas dinner. Or this would work for a New Year’s Eve dinner as well. Anytime is Paella time. Enjoy!

Chop chicken into 1″ pieces; take chorizo out of casing and roll into small (1″) meatballs.

Dice pepper and onion and mince up garlic cloves.

Heat up chicken stock in a separate pan and keep hot, just under a simmer.

Add olive oil to pan or wok and heat on high. When good and hot, add chicken and chorizo and stir frequently until the meat is browned.

Add rice and stir until the rice has been coated with oil and mixed in well. 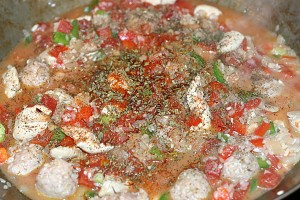 In go the saffron and other seasonings

Then add the can of tomatoes, lemon juice, clam juice and seasonings. Stir together, then cover and set on low-medium heat. Check at regular intervals and add the hot chicken stock to the Paella as the rice absorbs the liquid.

Rinse the mussels off with cold water and give them a scrub if you like. Remove the “beards”– the stringy fibers the mussel used to anchor itself. Make sure all mussel shells are tightly closed. If any are open and don’t close immediately with a couple taps against the counter, discard.

10-15 minutes before the rice is finished cooking (about 30 minutes, 40-45 total cooking time), add the shrimp and mussels. Since the rice can’t really be stirred at this point, push the shrimp down and fold into the rice so it’s completely covered. Push the mussels about halfway down into the rice and cover the Paella. Cook or 10 or so more minutes, until the mussel shells have opened. discard any shells that don’t open after cooking.