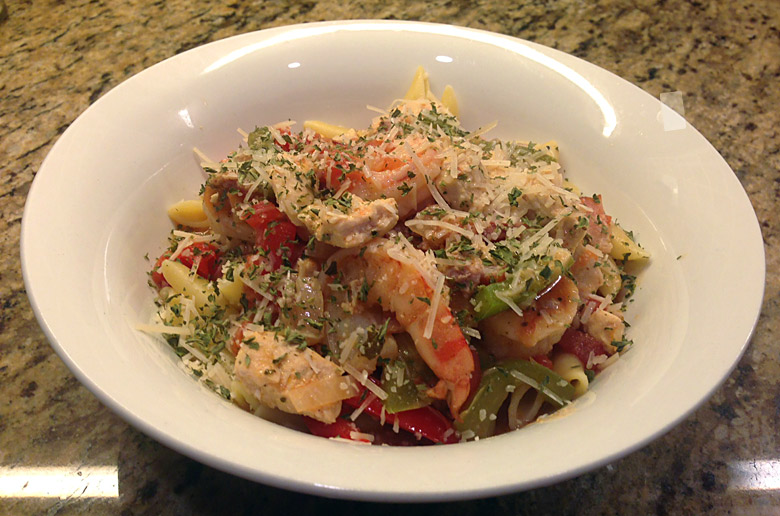 My wife ordered something called “Cajun Pasta” from a restaurant once, and she really liked it, so much she asked me to give it a try sometime. She liked my version, and it’s since worked its way into a semi-regular rotation on the weekend meal list.

Chop up vegetables, cut up chicken and sausage.

Cover the chicken pieces liberally in the Cajun/Creole seasoning of your choice– I used Tony Chachere’s Creole Seasoning. Add a tablespoon of olive oil to a pan, get it good and hot, and brown the chicken and sausage. Then add the vegetables and cook until the veggies start to soften up, then we’ll take the cooked meat and veggies off the heat and set aside.

Most other Cajun Pasta recipes online call for adding heavy cream, and I’m sure those versions are really good, but I like to keep it a little lighter with my version (and I didn’t have any heavy cream anyway). So I made a roux, as with the Gumbo/Jambalaya recipe, but using 1/4 cup or a little less of olive oil. Add the olive oil to a pot large enough to finish cooking all the ingredients. Heat the oil on medium heat and gradually add the flour, stirring it in constantly. Since we’re using olive oil, which doesn’t withstand heat as well as butter or peanut oil, don’t cook the roux until it’s browned, we’ll go with a “blond” roux– just cook and stir until it’s the consistency, but not the color, of peanut butter.

When the roux is ready, add the cooked meat and veggies, the tomatoes, and slowly add and stir in the chicken stock. Add the seasonings, including more of the Cajun/Creole seasoning if you like. Simmer for about 20 minutes- 1/2 hour. Add the lime juice when it’s almost done cooking.

Serve over your favorite pasta (I used penne rigate), and add shredded parmesan cheese, and some chopped parsley if you like. Enjoy!