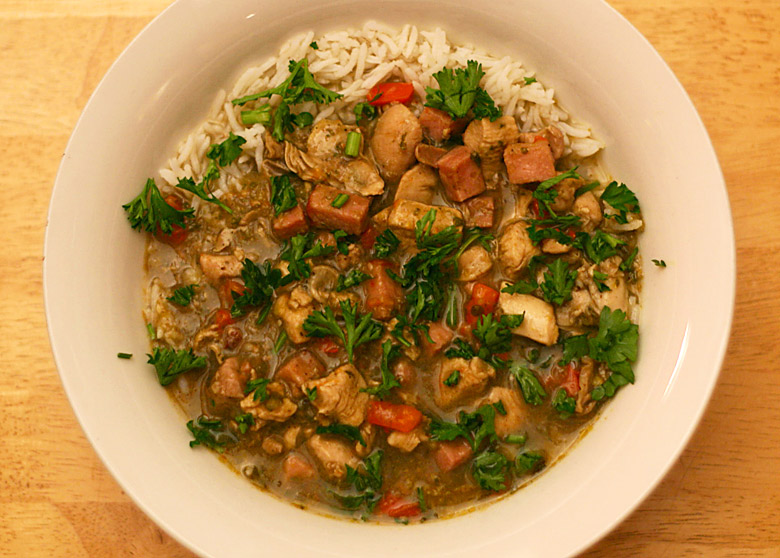 I thought I’d try something a little different here– I found a book called the “Picayune Creole Cook Book” at a garage sale a while back, and it turned out the book has a pretty interesting background, being part of the history of New Orleans cuisine. It was originally printed at the very beginning of the 20th century and 17 editions were printed between 1901 and 1985. I’m the proud owner of a copy of the 13th edition that’s in very nice condition, printed in 1966. Here’s an online article about the history of the book for those of you who may be interested, from a writer at the New Orleans Times-Picayune appropriately enough. Here’s a Google Books copy of the 6th edition of the Picayune Creole Cook Book online.

I’ve been interested in Creole and Cajun-style cooking for a long time, and I’ve posted a couple Creole/Cajun style recipes, like the recipe for “Jambalaya Gumbo” I posted a while back. But I didn’t how close my attempts at making it were to the “real thing”. There’s nothing set in stone about this style of cooking– it’s based in French cuisine and influenced by Spanish and African cuisines and ingredients, as well as local ingredients that were readily available. So this style of cooking, with its rich variety of cultural and regional influences, suits my tendencies to tinker and experiment with recipes perfectly. But sometimes it’s good to get a baseline– to modify a style of anything to make your own version and make it well, it’s important to have a good understanding of what you’re modifying. So I thought I’d try my take on some recipes from the Picayune cookbook.

One surprise about these recipes is that the ingredients are a little different than I had expected. I had heard about the “holy trinity” of herbs used in most Cajun/Creole style recipes: oregano, thyme and bay leaves. Here parsley is used in place of oregano. Then the “holy trinity” of vegetables I had heard about, onion, bell pepper and celery, was also a little different: no celery and very little pepper. And no garlic? Other than substitutions I made out of necessity (which I’ll point out in the recipe instructions) I tried sticking close to the basic recipe, not get too “mad scientist” and make too many embellishments, as I’m often tempted to do. One of the exceptions I made was, the recipe just seemed like it needed a few cloves of garlic– I couldn’t resist adding some.

One ingredient, which obviously is important since it’s part of the name of the dish, “Filé”, you may not be familiar with. It’s the ground-up leaves of the sassafras plant, which thickens the gumbo and adds a subtle but distinctive flavor to the dish. From the Picayune book:

First, it will be necessary to explain here, for the benefit of many, that “Filé” is a powder, first manufactured by tribes of Choctaw Indians in Louisiana, from the young and tender leaves of the sassafras. The Indian squaws gathered the leaves and spread them on a stone mortar to dry. When thoroughly dried, they pounded them into a fine powder, passed them through a hair sieve, and then brought the filé to New Orleans to sell, coming twice a week to the famous French market, from the reservation set aside for their home on Bayou Lancombe, near Mandeville, La. The Indians used sassafras leaves and the sassafras for many medicinal purposes, and the Creoles, quick to discover and apply, found the possibilities of the powdered sassafras, or “Filé“, and originated the well-known dish, “Gumbo Filé“.

–little bits of history like that among the recipe instructions are part of what make this book such a great and interesting find.

(Oddly, although it’s one of the main ingredients of the recipe, Filé wasn’t added to the ingredient list in the 6th edition, though it’s discussed thoroughly in the instructions. This oversight was fixed in the 13th edition I have.)

I reduced my version of the recipe to about 2/3 of the original, which was said to serve 6. This recipe will serve 4 just fine.

The Picayune recipe called for “2 quarts oyster water and 2 quarts boiling water” without explaining exactly what “oyster water” is. As far as I could tell, “oyster water” is the water or “liquor” reserved from shucked oysters. How one collects 2 quarts of it though, I’m not sure. I got about 1/2 cup of oyster liquor from the 2 dozen oysters I shucked for this recipe. I guess with all the oysters they shucked in turn-of-the-century New Orleans, oyster water was in plentiful supply. Anyway, doing a little research online, apparently clam juice (commonly available in bottles) is an acceptable substitute. Also, I don’t know why the original recipe called for an entire gallon of liquid (2 quarts of oyster water plus 2 quarts of boiling water). I added the 1/2 cup of oyster liquor and enough water to the quart of clam juice to make 1 1/2 quarts, less than half of the amount in the original even though my recipe was only reduced by a third, and it was plenty of liquid for this recipe.

The original called for “1/2 pod of red pepper, without the seeds”. I assume the recipe meant a pepper like a cayenne or some other type of chili pepper, not a red bell pepper. But I wasn’t sure, so I went ahead and added both. I like peppers, and as mentioned I couldn’t resist tinkering with things a little. That plus adding garlic were the only voluntary substitutions I made, so I think I stayed pretty true to the original recipe.

Now, for the cooking directions part of the recipe, first I’ll start with the shucking of the oysters. Since I’ve never actually shucked an oyster before, this is the first thing I attempted. The Picayune recipe never even mentions shucking the oysters– for the intended audience for this recipe, your average early 20th century New Orleans cook, it was probably as simple and obvious to mention as how to crack an egg. But not so easy for me at first– I thought it was going to take me forever to shuck 2 dozen, and maybe seriously wound myself in the process. But once you get the hang of it it’s not too bad.

I used a flat-head screwdriver to do the shucking. If you plan on doing any amount of oyster shucking in your future you might want to get a specially designed oyster knife. DON’T use a sharp kitchen knife. 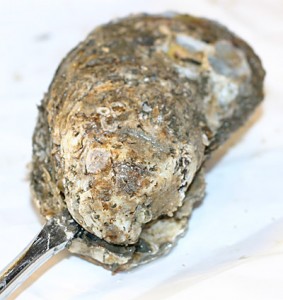 Put the oyster on a flat surface and find the shell’s hinge. At the hinge there should be a natural space large enough to get the screwdriver or oyster knife point in, and this is where it gets tricky. At first it seemed impossible to pry open– if I twisted or pried too hard, part of the shell would break off. So I tried using force to get the screwdriver in between the shell, and only succeeded in slipping and jamming it into my wrist. That hurt! Fortunately, no major harm done to me. Unfortunately, none done to the oyster yet either. The trick, it turned out, is to wiggle the point into the gap, not pressing too hard. When it’s in far enough, like an 1/8″ or so, try carefully prying and twisting at different angles until you can get enough purchase and the shell gives way. You eventually get a feel for it.

With the shell opened slightly, slide a regular knife in on one side, against the shell, to cut the oyster away from the inside of the shell. Now your oyster is revealed. Carefully pour off the liquid, the “oyster liquor” in a container to save. Cut the oyster away from the other shell and save it in another container and refrigerate oysters and oyster liquor for a little later. 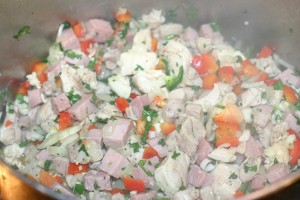 Now cut the chicken and ham into bite-sized pieces. Chop the onion, parsley and thyme (and the added garlic and pepper) “very fine”. Start heating the quart and a half of clam juice, liquor from the oysters and water in its own separate pan. Heat up the butter in a “deep stewing pot” and fry up the chicken and ham. Then add the veggies and cook until the onion is browned, stirring a lot so as not to burn. When everything’s nicely browned, add the heated clam/oyster/water mix and the rest of the seasonings– bay leaf, salt, black pepper and cayenne pepper.

Let that all simmer for an hour or so. A few minutes before it’s about ready, add the oysters.

the filé should be added at the very end, because the gumbo should not be on heat or reheated with the filé added, or it will become “stringy and unfit for use”, according to the Picayune. The Picayune recipe here calls for a complicated procedure using tureens and hot water baths to keep the gumbo warm for serving, but since we intended to immediately eat the gumbo, I just turned off the heat and thoroughly mixed the filé in a little at a time.

Serve with rice that was cooked separately (“never boil the Gumbo with the rice”, the Picayune says), and garnish with some fresh chopped parsley if desired (that’s my recommendation).

What was my takeaway from this experiment in early 20th century New Orleans cooking?

All in all, It turned out really good. My wife Kristina said “this one’s a winner!” I hope you enjoy it too.