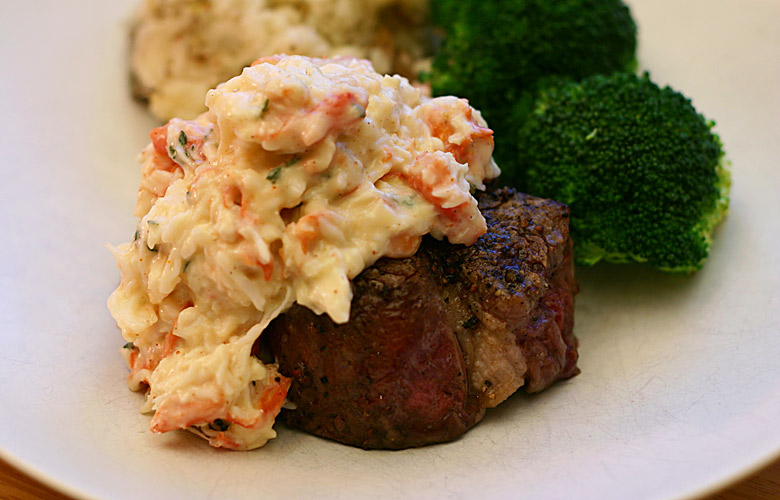 This is what I made for my wonderful wife Kristina and me for Valentine’s Day. Kristina had picked up some Filet Mignon and King Crab legs, which would have made a terrific meal with the steak and steamed crab legs, but I wanted to do something just a little more special. So I came up with this idea to top the steak with a crab sauce. The sauce is just a modified version of your basic French bechamel sauce (a roux with milk added), but with the crab and extra ingredients I added it turned out even better than I expected. Kristina agreed!

Normally I like to grill steak, as in the “Perfectly Grilled Filet Mignon” post, and I’m a year-round barbecuer…I don’t let cold temperatures stop me. But right now my kettle grill is buried in 3 feet of snow and ice, so I decided to cook the steaks indoors in my trusty cast-iron pan, as in my very first post, “Steak au Poivre“. Either method of cooking the steaks would be good for this recipe, but it is a little simpler logistics-wise to cook the steaks and make the sauce together on the same stove.

First, I got the most time-consuming part out of the way, separating the meat out of the King Crab legs. The King Crab meat really worked well with this recipe, but you could buy some fancy lump crab meat instead if you want to save time. I got probably about a pound of meat or a little less out of two pounds of crab legs, so if you use already cleaned crab meat use about a pound of it. 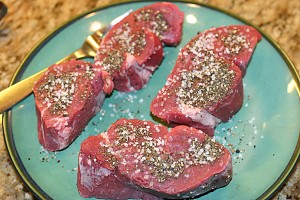 Now let’s prep the steaks. Pat them down with paper towels to get them as dry as possible, if need be. Add the coarse sea salt or kosher salt and the coarse-ground black pepper liberally to each side, as shown. By the way, the picture shows 4 filets– the two smaller ones were for the kids, who didn’t want and wouldn’t have appreciated the crab sauce. But if you wanted to make this recipe for 4, the amount of crab sauce in this recipe would probably be enough for 4 filets.

Now the sauce. This step you can either do before or during the time the steaks are cooking, depending on how good you are at multitasking. The steaks won’t take long, so you can make the sauce before the point of adding the crab meat, then cook the steaks, then gently reheat the sauce and add the crab meat when the finished steaks are resting. Or you can do the steaks and sauce at the same time and have it all come together at once if you’re a good juggler. 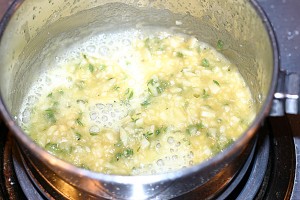 Heat up the two tablespoons of butter in a small saucepan at medium heat (hey, we’re actually using a saucepan to make a real sauce). Add the garlic, which has been very finely minced, and the thyme. When the garlic just starts to soften up, start adding the tablespoon of flour, a little at a time, stirring, until you get a nice pasty consistency, and stir until it just turns a sand-brown color. While making the roux, heat the cup of milk, either on the stove or in the microwave, then add it a little at a time while still stirring, always stirring, until you have a nice smooth sauce. Then add the grated Parmesan, again a little at a time until it’s mixed in nicely. Now add the tablespoon of spicy brown mustard if you wish. The sauce tasted really good at this point without mustard, but I thought it needed a little something extra, so I decided to add it. Another option would’ve been to add a little horseradish– I have a feeling that would’ve been even better, but sadly I had none on hand at the time. But the mustard was good. The dash of cayenne gave the sauce an extra bite. Add the crab to the sauce right before putting the meal together, and gently fold the crab meat into the sauce instead of mixing– we want to preserve the chunky lumps of delicious crab coated in the sauce, not break it up.

To cook the steaks, heat up your trusty cast-iron skillet on high heat, and melt the butter. Preheat your oven at 350 degrees. When the skillet is good and hot, put the steaks on and cook for a few minutes on each side, cooking to a nice dark-brown sear but not burning. When the steaks are nice and seared on each side, put them on a cookie sheet or similar, insert a meat thermometer in the biggest steak, and put in the oven until the steaks reach exactly 125 degrees for medium-rare (or 140 for medium, but as I’ve said before, I think anything over medium-rare is a crime against steak).

Let the steaks rest for 10 minutes or so, then top with the crab sauce. Serve with your vegetables of choice– I served these with some broccoli and a nice side of smashed garlic potatoes, which I’ll feature in another post one day. Enjoy!