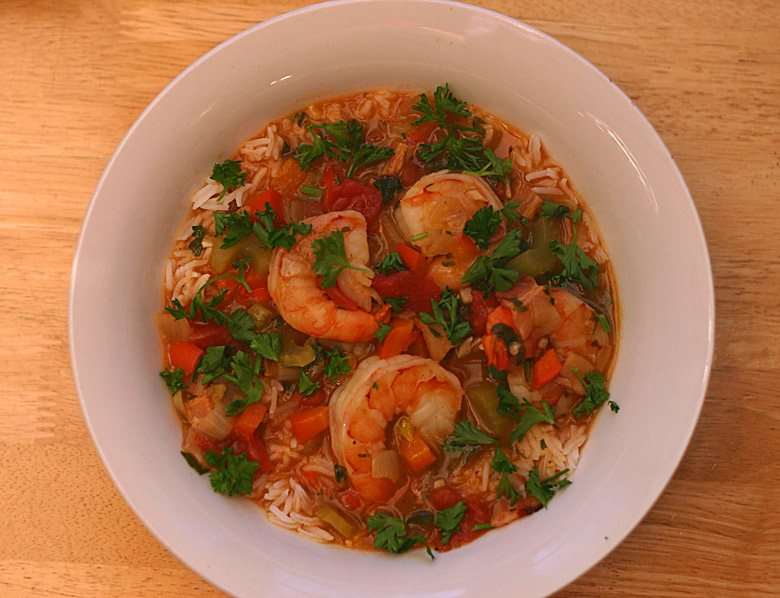 A few weeks ago I posted a recipe, Gumbo Filé, from the ‘Picayune Creole Cook Book‘ and said I’d try more recipes from this historical New Orleans cookbook. Here’s another, just in time for Mardi Gras (or for Lent, because as the recipe says, if on Friday and you do not eat meat, you can substitute ‘oyster water’ in place of broth. Or in our case, bottled clam juice in place of broth, because you probably won’t be able to get a hold of enough oyster water. I discussed not being quite sure what ‘oyster water’ even is in the Gumbo Filé post).

So here’s what I did differently this time in this recipe from the Picayune recipe:

The Picayune recipe calls for cooking the shrimp for waaaayyy longer than I ever heard of doing– first it says to boil the shrimp according to another recipe in the book, then to cook the shrimp for another 45 minutes along with the rice in the jambalaya. I think this must be a difference in basic philosophy in how to cook shrimp between the day the Picayune book was written and these days. I have no idea what you’d even be left with, shrimp-wise, after boiling the shrimp, then further cooking for 45 minutes. Maybe that’s why the Picayune starts with 80 shrimp– perhaps they shrink down to little rubbery calamari-like bits. I cooked the shrimp the way it’s usually done these days, by adding it just a few minutes before the jambalaya is done.

This recipe, which you can follow on page 163 of the Google Books copy of the 6th edition of the Picayune Creole Cook Book if you want to see the original instructions, calls for cooking the rice with the Jambalaya, but I cooked it separately as in the Gumbo Filé recipe, because rice cooked with the jamablaya will keep absorbing liquid and quickly turn mushy, especially the next day if you have leftovers.

Finally, I went ahead and added a few more ingredients I’m used to with meal like this, like bell pepper and celery to make the veggie trinity along with the onion, and a little oregano.

(I think the last ingredient listing meant 2 sprigs each of thyme and parsley, plus bay leaf, because the recipe directions mention adding chopped thyme, parsley and bay leaf)

Chop up the onion, bell pepper and celery and cook in a pot with the butter, stirring until the vegetables are well cooked and a little browned. Mix in the flour. Then add the finely chopped garlic, thyme and parsley and fry, stirring, for another 5 minutes or so.

Add tomatoes and either chicken stock or clam juice which has been heated up. I added about a quart of homemade chicken stock, plus a little bit of quick seafood stock I made by taking the shells from the shrimp I used in the recipe plus a couple extra sprigs of thyme and some black peppercorns and boiling in some water in a little pan for a 1/2 hour or so. I did that just to add a little more seafood flavor to the jambalaya. You could also use 1/2 chicken stock or broth and 1/2 clam juice, or as mentioned, all clam juice.

Add the bay leaf and the remaining spices and simmer on low for 1/2 hour to 45 minutes. A few minutes before serving, add the raw shelled shrimp. The shrimp should cook only long enough so it just starts to turn from translucent to opaque.

Serve over cooked rice. Garnish with fresh chopped parsley if you like. Enjoy!